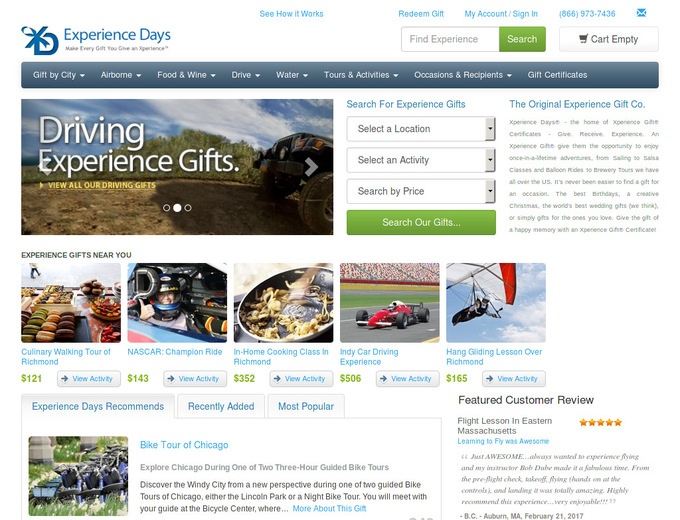 Displayed here are all online XperienceDays.com coupons, discount coupon codes and discount specials. Click on any link to access the corresponding online coupon. Whenever there is a special coupon code or promo code with the offer, first click on the related link. Then, after making your purchase selections in the window that opens, you have to enter the coupon code before you submit your order.

From You Flowers Promotional Codes

Save on Sympathy Collection.
From You Flowers Promo Code: IR1

15% off all personalized birthday gifts

Save 10% on our Create-Your-Own Signature English Muffin Assortments!

If you couldn't find online discounts that met your needs today, Go To Xperience Days to look at the latest discount products and hot deals. Remember that if you add this page to your Web bookmarks, you can come back to look whenever you want. As soon as discount promotional offers and online coupons become available, we add them to our site.

Overall Xperience Days has a 2 star rating based on 4 user reviews.

i purchased a gift certificate for formula 2000 half day experience and i tried redeeming it online but there were no options available. i emailed them and provided my gift certificate number and have not received a single reply to my request. I have been emailing them for last 3-4 months now and still no response. i want my money refunded or atleast the experience- total rip off.

My involvement with Xperience Days was when I received a birthday gift certificate for a Hot Air Balloon Ride over Southern New Hampshire. The ride was not what I had expected or advertised. Beware, Xperience Days is nothing more than a booking agent and takes no responsibility for adventures if a vendor does not meet his/her's obligation to a client. I received no assistance for my complaint. As a matter of fact, the CS representative at Xperience Days was quite rude to me. I was seeking a refund for my friends who purchased this experience for me. No refund given.

This was my first experience in a balloon ride with A&A Balloon Rides of Derry, NH. The cost, $200.00 The first 2 dates were cancelled because of poor weather conditions. The first one on 9/11/2013 because the winds were greater than the allowed 5mph (they were 7mph) and the second one on 9/23/2013 was cancelled because of ground fog. Finally on 9/25/2013 at 6 AM I met Andre (A&A) at a business plaza on Rt 111 and Ermer Rd., Salem, NH. There were two other balloon companies there waiting for their clients. When our group gathered, we all jumped in the van. The driver drove us to the launch site, which was in the back of the Wal-Mart Super Center on North Broadway (Rt. 28) in Salem, NH.

Once at the site, preparation took approximately 45 minutes. My wife who did not join me for the flight was on the ground taking photo's while I took the photos in flight.

We all climbed in the basket, 7 adults, 1 crew member and the pilot, Andre. Also in the basket were 2 propane tanks. Visualize a can of sardines, that's how close we were to one another. I could barely turn 180 degrees when I wanted to take pictures.

I was told that the balloon was over 100' in height. But we who were in the basket never were higher than 175' I kept asking Andre how high are we? He looked at his Altimeter and said at different times, 150', 125'. 175' then we descended on a pond maybe 25' I asked him why we were flying so low? and he said, if we were any higher, the winds would be stronger and the flight shorter.

My complaint for this experience was never resolved. I was told I could not get a refund because Andre met his obligation by providing me a ride that lasted more than 50 minutes and rose to an altitude of 500' to 1500'

His word against mine. And yet I have time stamped photo's and my wife as another witness.

Moral of this story, if you want to go on a balloon ride, check out the companies before hand, read the reviews and most importantly, "Ask Questions: How long, How high, How many people in the basket etc."

The previous response was posted by George at North Fork Wine Tours. George is correct in stating that he was a vendor with Xperience Days until we removed his services from our portfolio due to the number of complaints received. In short, George offers a transport service masquerading as a Wine Tour. A typical review of George's tour can be found here http://www.yelp.com/biz/north-fork-wine-tours-greenport

Xperience Days has been in touch with George to address these customer complaints, however he has chosen not to respond, but instead to vent anonymously on forums in an attempt to tarnish Xperience Days reputation.

ripoff of customers and vendors

I was a vendor for them but the final 2 months I didn`t get paid for the jobs I did. The account clerk was nice enough to tell me the checks were on Michelle Geib`s desk for signiture, she`s the owner. When I spoke to her she said she`d look into it, like she didn`t know the checks were on her desk.She never returned any phone calls. I`m owed over $1700.

BTW they used to tell me they never return money if there`s a problem, which is a customer complaint.

Don't complete your purchase without verifying that the deal worked as expected. We are NOT responsible if you don't get the price you wanted. Every coupon can change or expire at any time, leaving our listings out of date. If you think that any discount codes or promotional deals listed here are incorrect or expired, please tell us so that we can fix the the description or delete the listing.